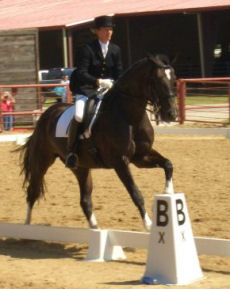 
Verena grew up in a small, charming town in Germany called Kastellaun. Since childhood, she has loved riding and dressage. She would help out at her riding academy in exchange for lessons and a chance to be around horses. Her passion for horses was unwaivering during her childhood and throughout university. She chose however, to follow in her father's professional footsteps and become an attorney. After completing law school and her exam, she began her career as a German lawyer. As fate would have it, in 2001 we met each other. I was more interested in Enterprise Technology than horses but we fell in love, were married and began our life together in Dallas, Texas. I still joke about ridding the world of at least one lawyer.

Verena found a barn in Dallas and chose to pursue her love for dressage professionally as an instructor. For seven years, we enjoyed living in Dallas and Verena worked with hundreds of clients. The barn where Verena taught also imported German horses and Verena would train them and take them to shows for competition so that perspective buyers could see them in action. She loved the challenge of competition and still does today. In the process, Verena found that she also really enjoyed working with her clients and their horses to train and prepare them for shows. (read more about Verena's accomplishments)

In 2008, we moved to Colorado to start a family. We also decided that it was time to start a dressage barn of our own. We set out with a clear vision to create a firstclass facility that catered to a limited number of exclusive customers. The idea was to keep the barn small enough in size so that Verena could develop a few horses of her own yet have plenty of time to work with each of our clients as individuals. Rather than trying to attract as many customers as possible, we wanted to work with the most committed and passionate customers possible. We bought the property that would become Pferdehof in 2009 and began remodeling and transforming it into a dressage barn. Upon the completion of the indoor arena, Pferdehof celebrated it's Grand Opening October 1, 2011.

Since opening, we've had the good fortune of meeting several great people and have already begun working with new clients. It's now time to start enjoying all the hard work and get busy riding, training and going to shows. We hope you will visit us and consider making Pferdehof, your dressage barn too!